‘What can be the nature of physical relationship when in distance?’ Together with performer Yiannis Logothetis and Virtual Reality (VR) company ImproVive, Evangelos Biskas is searching for alternative ways to develop a performance that challenges the limits of space and time. In Immortal Game VR, ImproVive creates a digital playground in VR where Yiannis joins from New York and Evangelos from Tilburg. The performers meet and interact with each other as avatars, and explore a new realm of physical possibilities that broadens their perception of movement. The audience can join the performance from anywhere in the world; they can experience it inside the Virtual Reality using their own headset at home, or they can view an online video stream providing a 2D view of the performance in the virtual world.

About Evangelos
Evangelos Biskas (Thessaloniki/Greece, 1994) is a dancer and choreographer fascinated by the ability of the human body to understand and to express things. His curiosity to explore new possibilities of working with the body drives him to develop interdisciplinary projects, including other media such as physical theatre, contemporary circus, sound design and new media. He graduated from the department of dance and choreography at Fontys Hogeschool voor de Kunsten (FHK) in Tilburg, Netherlands (2016) and was nominated by the academy’s award ‘Jacques de Leeuw prijs 2016’. With his graduation work ’Eternal Chilling’ (2016) he won the ‘Moving Forward-Young Dance Makers Award 2016’. From 2017 till 2020, he was a supported young artist of PLAN-Brabant in collaboration with DansBrabant. In 2020 Evangelos joined Corpo Maquina as a maker.

This virtual residency is a co-production of Corpo Máquina Society. 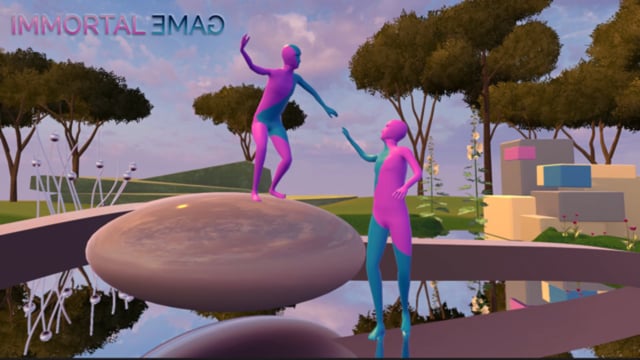 This performance is only sold within the passe-partout.
Find the overview of all the performances within this package here.